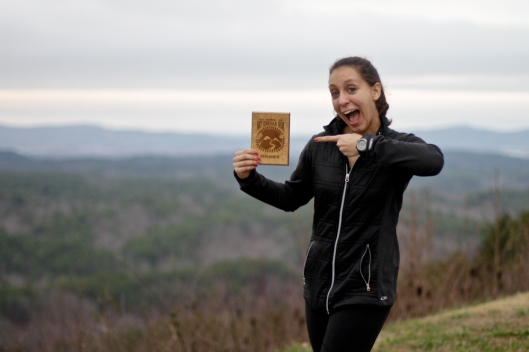 Warning—this will be long and most likely will ramble, but I have over seven hours worth of thoughts to share. If you’re looking for the Cliff Notes version, here it is: I finished in 7:22, fell a lot, bled a little, loved every moment, and am itching to do another. If you want to take a peek inside my head, here we go:

Zack and I decided to drive to the race on Saturday morning, since the start is only about an hour and a half from home. I chose to wear a tank top that crossed in the back (read: no falling straps), a long-sleeve tech shirt that I threw off at the second aid station, and my favorite, way-too-big, ripped, North Face shorts. We made good time until we got confused in the dense fog, made a wrong turn, and drove down a narrow dirt road for about two miles before we were able to turn around. I made it literally three minutes before the race started. Forget about warming up—my heart was pounding from cutting it so close!

Please note the pole dancers to the left of the picture

What’s the best way to calm pre-race jitters? The Harlem Shake of course! Props to Suman and Lisa for kicking things off for us.

Greg had warned me that the first few miles conga-line pretty tightly and to get into the middle of the pack to avoid being slowed down. I wedged my way toward the middle just as the Race Director announced the start of the race and blasted “Sweet Home Alabama.” A mix of excitement, fear, and accomplishment washed over me as we took off.

The first few miles flew by easily. I made friends with the people around me and was able to keep a comfortable pace. It was evident almost immediately that the course would be covered in more water than we had expected—parts of the trail itself had turned into an ankle-deep stream.

I stuck to my plan and ran through the first aid station, only pausing to shout out my number for the volunteers to check me in. Soon after we hit a fire road that stretched for 2.25 waterlogged miles. Wet sand ≠ fun. The road was a steady uphill followed by a nice downhill—easily runnable, but I took it slow to save energy for the remaining 26 miles.

Not my most flattering shot

It was nice to see the hubs at the second aid station, and that gave me a burst of energy. He did a great job all day photographing the race, refilling my Gatorade and fuel, and capturing me stuffing my face with chips. He’s the best. 🙂

The next 10k stretch from Clairmont Gap to Adam’s Gap was going to be the toughest in my opinion, especially because of the wet trails. The first climb is a bitch on a good day because of the steep switchbacks, loose rocks, and narrow trail, and the wet ground made it even hairier. I made friends with a group of guys who were amused when I unleashed my “Jersey” and started dropping F bombs left and right. Every time they saw me again on the course they called me Jersey or Little Lady, because clearly I’m anything but.

While this section of the course didn’t have too much water to worry about, the rocks and leaves were incredibly slippery. I fell hard twice—once faceplanting and cutting my left knee on a rock, and once accidentally stepping onto an angled rock and sliding all the way down and almost off the trail. I have a nice tiger stripe from my butt almost down to my ankle from that fall.

It could have been worse though. I passed a man who had fallen, sitting casually on the side of the trail with his hat resting on his knee. I later found out that he had fallen onto a rock, split open his knee, shattered his patella (kneecap), and exposed some tendons. He was airlifted out of the woods. Did you just gag? I did.

Once I hit mile 15 the race started to blur together. I spent as little time as possible at each of the six aid stations—Zack would refill my Gatorade and fuel while I choked down oranges, chips, M&Ms, and Coke. The aid station volunteers were wonderful! They blasted music and greeted everyone with smiles, and hurried to refill your water bottle if needed. One volunteer even brought jars of homemade pickles for the runners to snack on. I was all over that pickle juice!

Check out the look on my face

The water on the course was challenging, and made me more mindful about foot placement. Places that had little or no water two weeks ago were now anywhere from ankle- to knee-deep, and sometimes had a pretty fast current. At one point I slipped and fell while crossing a stream, and had to put my hands down to keep from going all the way under. The biggest creek crossing right before Lake Chinnabee was so deep that race organizers had strung a rope across to help runners get to the other side. My feet were soaked the entire seven and a half hours, but my shoes drained well and my new Swiftwick socks were a dream! Not a single blister, and I kept all ten toenails!

Another section of the course that I had planned for was the two-mile stretch of fire road 26 miles into the race, right before Lake Cheaha. I wanted to run as much of it as possible to make up for the time I was about to lose climbing Blue Hell. It felt strange to be on a smooth surface again (but still going uphill), and I was able to get my pace back up to about a 10-minute mile. 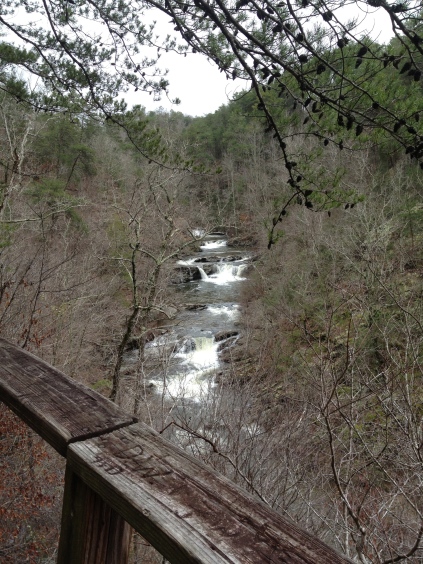 Contrary to what TLC told me, I do chase waterfalls

I made it to the final aid station in kind of a shock. Blue Hell still loomed in front of me—literally—but that’s when it hit me that I would actually finish the race. I stopped for a few minutes to regroup and choke down some potatoes with salt, then joined a group of runners moaning and joking our way to the top of Bald Rock.

I couldn’t tell you anything about the final two miles once we reached the top of Blue Hell other than one of the runners near me was a badass lady who has completed over 100 ultras, countless Ironmans, and is running Badwater in the summer. Her stories about her adventures kept me completely distracted, and before I knew it the finish line was in front of us. 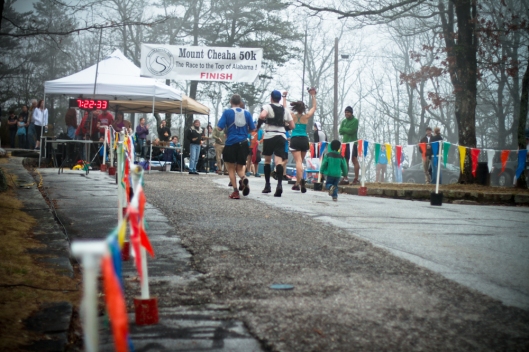 I choked up crossing the finish line, but still managed to hoot and holler like a madwoman. My official time was 7:22:58—I’m thrilled with this because Goal #1 was to finish before the 9 hour cutoff, and Goal #2 was to finish in under 8 hours. After I changed into some dry clothes and stuffed my face with some Mellow Mushroom pizza (mmmmm!), Zack and I hung out at the finish line to cheer on the remaining runners. The fog rolling in made the whole scene surreal—I really felt like I was on Cloud 9. Or maybe it was the extreme Runner’s High…

Overall, the day could not have gone more perfectly. The course was very challenging, but it helped me prove to myself that I belonged running that race. I know that not every race will go nearly as well, which is why I am milking this feeling for all it’s worth.

Here are a few more shots from the race:

Dan all ready to run 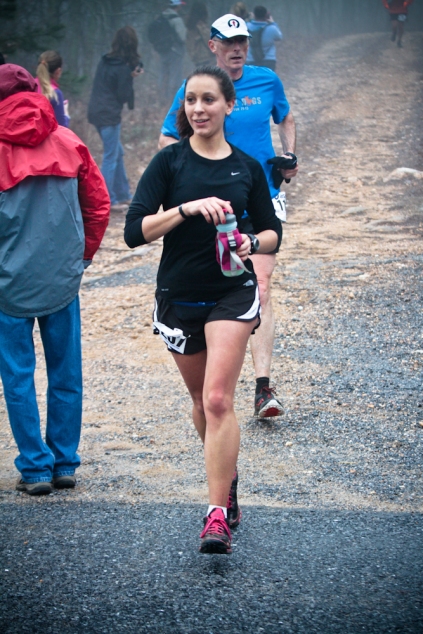 Getting ready to refuel

This run brought to you by Adidas and Swiftwick

A peek at aid station 6

Summary of my day 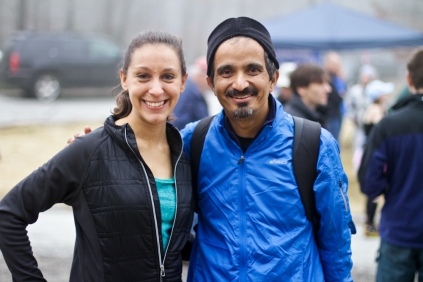 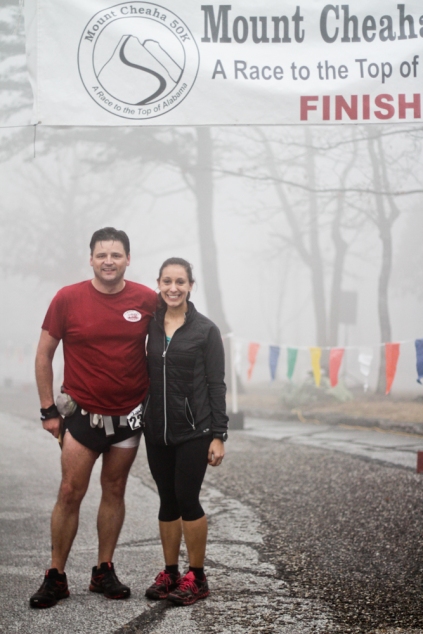 My best/worst race face yet!