I have wanted to write this post for a long time now. Ever since I moved to Birmingham and ran downtown for the first time, I’ve had a certain affection for this tired and worn down, yet blossoming city. And it’s my favorite place to run.

Don’t get me wrong—it’s not that I don’t like running through the perfect neighborhoods of Homewood and Mountain Brook. They’re just so…boring. Houses, trees, car-dodging—they’re Anywhere, USA. Running downtown is an adventure, an opportunity to appreciate Birmingham and its grungy beauty. In a span of 13 miles you can get from one side of the city to the other, running past old and new, soaking in 360 degree views of the skyline and the surrounding hills.

Last Friday I ran my long run downtown with some runners in my group—we started at the end of Highland Park and ran the Mercedes Marathon route. I of course took pictures as we went, and we had some fun and beautiful photo ops.

I know the majority of my readers are from Birmingham, but for those who aren’t, welcome to my city:

Golf course and the broken fence

Mile 1-3 Starting at the International Presbyterian Church, you run out of Highland Park and along the Highlands Golf Course with its rolling hills and manicured greens. A right onto Clairmont takes you in front of Piggly Wiggly and Los Amigos—both neighborhood staples and a tempting spot for a margarit—er, water break.

Run into historic Forest Park and you feel like you’re in a different city altogether. There’s a fun, artsy vibe as you run past Zoe’s, Little Savannah, Silvertron Cafe, and Naked Art Gallery.

Two lefts bring you to the edge of Avondale Park, the former home of a zoo and the infamous Ms. Fancy, a beer-drinking elephant. Around the corner are some businesses that have turned Avondale around—Freshfully, Avondale Brewery, and 41st St. Pub. It’s been amazing to watch such a run-down area become the new weekend hot spot.

A mile down the road you hit Pepper Place—an old Dr. Pepper plant and warehouses that now house designer shops, restaurants, advertising boutiques, and a great farmers market on Saturdays. 2nd Ave S is the spot where you can drink pickle juice and beer at an aid station on Mercedes Marathon race day.

The creepily awesome tunnel on 20th

Mile 4-8 Once you turn off 2nd Ave S and onto 20th St., you’re in the heart of downtown. The tall buildings (I can’t call them skyscrapers in good conscience) loom in front of you, pockets of thriving restaurants and abandoned storefronts line the street, and large trees create a canopy to run under, fulfilling my need to see some green on runs.

Running up the incline on 24th St. is always fun because I’m not as familiar with that part of Birmingham, so I soak it all in. It also takes you past the new Uptown District that centers around the new Westin hotel and will soon boast upscale stores, restaurants, and bars.

The streets are always empty early mornings downtown, despite it being a work day

Running along 11th past the Oak Hill Cemetery and turning left onto 19th is one of my favorite spots on the route. You get to see the skyline from a different angle, and although it’s small, it’s pretty. I also enjoy running past Kelly Ingram Park, the 16th St. Baptist Church, and the Civil Rights Museum, and reflecting on how far Birmingham has come in 50 years. 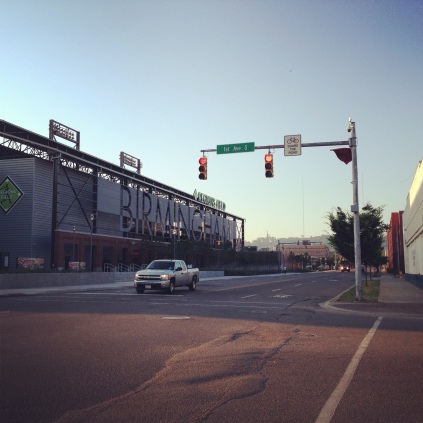 The newest and coolest spot downtown is between miles 8 and 9 on our route—Railroad Park, Regions Field, and Good People Brewing Company. Railroad Park was once just old railroad tracks and was recently turned into a gorgeous park made out of all local and recycled materials. It won the Urban Open Space award and actually beat NYC’s High Line (Zack’s still bitter about this). Regions Field is a wonderful, brand new addition to the area, and Good People is my favorite brewery.

Mile 9-13 Turning right onto 10th Ave S brings you into the Glen Iris neighborhood, home of Giuseppe’s Cafe, the Italian joint I have yet to try but I hear is good, and St. George, a pretty Greek church that sits on a hairpin turn and provides a great spot for an ice bath.

Leaving the neighborhood and turning right onto 11th brings you face-to-face with the first of a series of hills that make you lower you head, plow forward, and wonder why you ever thought that Alabama was flat. Or at least that’s what I do. The reward for reaching the top of 11th St. is coming into Five Points and being met with a cheering crowd if it’s race day, or otherwise getting to witness the dichotomy of upscale restaurants and homeless people that occurs in every city.

I see you Sloss… 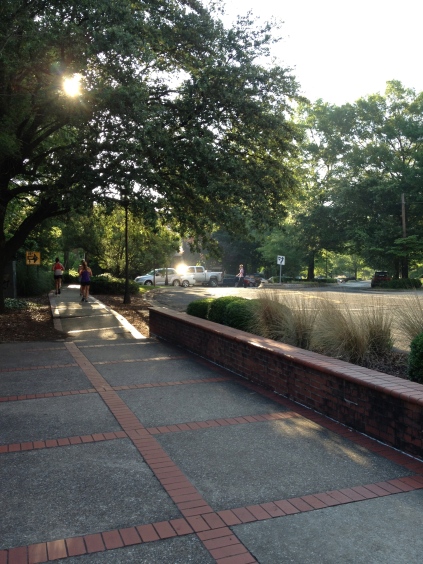 Coming out of Five Points and back into Highland Park is another favorite section of mine—you run past pretty architecture, Taj Indian restaurant, over the Red Mountain Expressway with a clear view of Sloss Furnaces, and through three pretty parks. And then you can collapse at your car.

I love that Birmingham is filled with old ads

I’m a firm believer that you need to drive across the country to experience it, but you have to be on foot to really get a feel for a place. In a car you’d miss the fading ads hidden behind trees, or the sunrise peeking out from a tunnel. You wouldn’t get to wave to the men at the Firehouse Homeless Shelter, or skip through the grass at Railroad Park.

So this is the Birmingham that I know and love. If you’ve never taken the time to explore Birmingham or your city, try running (or walking) it sometime for a new perspective. You may discover some new favorite spots of your own.

In one park looking at the other

53 thoughts on “Birmingham—I Run This Town”