What’s the most important accessory to runners, other than their shoes? Their GPS watch. Like posting every workout to Facebook, everyone knows that a run doesn’t count unless it’s been tracked by the little alien runners in the sky riding on the GPS satellites.

I’ve used a Garmin Forerunner 405 since 2009 and love the thing like a child. It’s been with me through PRs and death marches, snowy runs and sweat-fests. The hubs has a shiny new NikePlus watch that he loves and refuses to take off, even when not running.

Garmins and Nikes seem to be the most popular GPS running watches, so the Sylvans seem to represent the average runner. Unless you’re a trail runner, then Suunto is where it’s at!

I can’t tell you how many times I’ve seen runners get into the Nike v Garmin debate. And now I want to join in! I’ve had this post on my blog editorial calendar for a full year now. A YEAR! Who said that distance runners aren’t lazy? So here it goes—my two cents about some fancy computers we pour sweat and blood into. 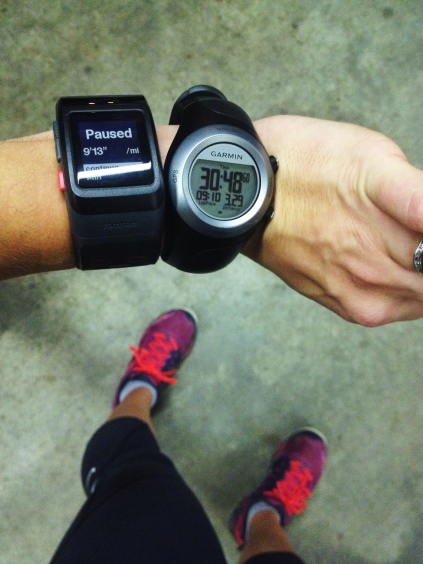 Disclaimer—neither company asked me to do this, and all opinions are purely based on my tastes. So take them with a salt pill.

Garmin—I’ve worn my Garmin for so long that it feels like an extension of my body, so this isn’t the easiest to judge. My 405 is pretty big and clunky, so it’s definitely noticeable on your wrist. Or my wrist, rather, since it’s pretty small. I tighten the band just enough so that it doesn’t bounce around but also doesn’t cut off my circulation, and that seems to work just fine. I’m also not a fan of the way my sweat pools under the face and band, but that may be more of a “hey, you’re human and active” problem, not a Garmin problem.

Lovable giant on my wrist

Nike—The watch itself is pretty comparable in size to the Garmin—noticeable without being too heavy or uncomfortable to wear. All the holes in the band allow for a better fit and less sweat (unless all my sweat today ran down my arm and pooled under my Garmin), though I wonder if they make for some funky tan lines in the summer. Anyone? Anyone? Bueller? 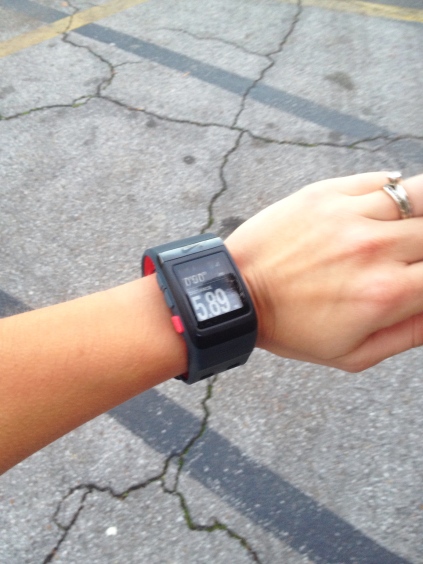 Slightly sexier – I would want the white, like my runner girl crush Kara Goucher

Confession—I have nothing scientific to base this off. On a track, the distances on the watches measure almost identical. But the pace? Who knows. If I were really serious about this, I’d bust out a stopwatch and log some repeats. But I’m not. From all the runs that the hubs and I did together, it seems that the Nike logs slightly faster times and longer distances. Nothing to complain about there!

Garmin—I’m torn on this one. I’ve had nothing but great experiences with Garmin customer service. When Sasha ate my watch, I called Garmin, cried my heart out, and they sent me a new one with a warning to keep it away from sharp teeth. Can you say fan for life? But Garmin is majorly lacking in community engagement. I get that they cater to all GPS products and more serious athletes, but c’mon—social media engagement goes a long way in today’s world. Their Twitter accounts are so, blah. And that saddens me as an ad/marketing girl.

Nike—Nike has this one locked down. Hell, I challenge almost any brand to compete against Nike support and community-wise. The @nikerunning social team is just incredible. They’re engaging, helpful, and just fun to chat with. The social media management system they use helps them keep the conversations personal. Plus, they sent me the new Lunar Flyknit +1s to test. Love. Read more about the Sylvan love affair with @nikerunning on the hubs’ blog.

Garmin—Garmin FTW right here. Everything about the watch is simple to understand and easily programmable. I love uploading my speed workouts onto it, so that I don’t have to think and run fast at the same time. I’m not a fan of their touch bezel, but that’s a moot point since Garmin has done away with that feature. Their website might not be shiny and flashy, but it’s heaven for a data nerd. I never even touch half the charts, but I like that they’re there if I need them. And I love how you can upload your run wirelessly—I walk into the house and the Garmin immediately starts uploading my run. Lazy runner, remember?

Nike—The Nike is great for new runners, or runners who aren’t obsessed with their splits (or watches). It gives you the bare minimum data (average pace), but won’t show current pace, let you upload a workout, or reset splits for speedwork. Their website is amazeballs in that it’s fun and colorful and easy to use, but you can’t manually upload your own workout. Wut. @nikesupport will do it for you with no problem, but that seems to be a pretty large feature they forgot.

Everything about this site screams, “Play with me!”

Garmin—As I mentioned, I put my Garmin through a hell of a lot, and it’s still kicking. And all of my Garmin-wearing friends have had theirs for years too. These things are like cockroaches or Fords—built to last. And, the ANT stick and charger are still in great shape too!

Though my watch didn’t survive the jaws of a Husky

Nike—Zack has only has his GPS baby since April, and so far it’s…ok. The backlight and sound only works occasionally. And I always see runners posting about needing to replace their Nike watches for one reason or another.  Luckily, @nikesupport is wonderfully responsive and willing to walk you through any issue. Though there shouldn’t be that many issues to begin with. 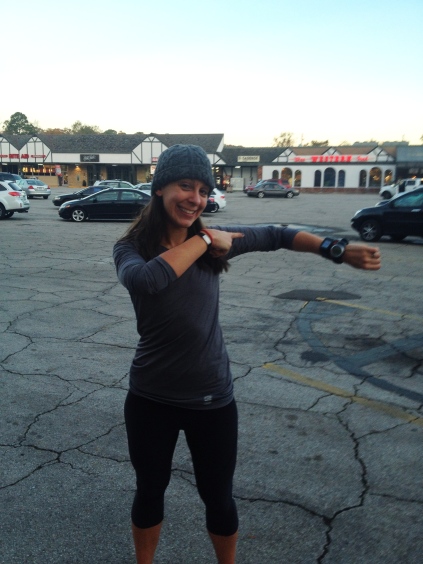 So what do I think overall? I’m a Garmin fan, through and through. My watch was a gift from my sister years ago, and I cherish it more than (almost) anything. If you’re a serious runner who will want to log different workouts and obsess over data and put your expensive toy through the wringer, go with a Garmin. If you want a more laid-back experience, fun colors, a sense of community, and a way to log miles without fancy features, go with the Nike.

Do you run with a watch? Which do you prefer?